Fight Scene from “The Hanshi in Brussels” 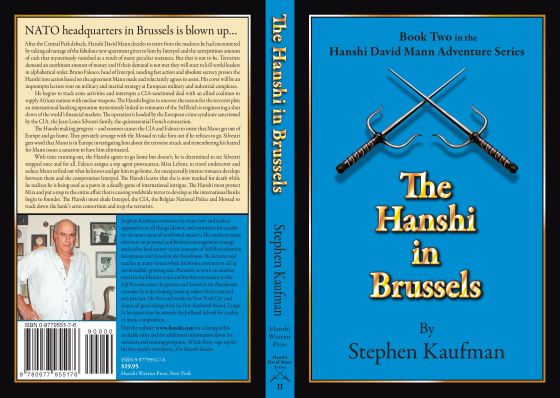 The Hanshi in Brussels by Stephen F. Kaufman

Robert’s red Saab convertible wound through very narrow streets that must have one time been ancient cart paths. With what seemed hardly enough room for one car, traffic sped by in both directions. The Hanshi sat silently hoping that Robert didn’t pile up against the front door of a building or someone else’s front seat as they zipped through Saint Gilles, always just slightly missing either a bicyclist or an old priest gently ambling by in the streets. He wondered if there were seat belt laws in Belgium. The area looked like a faded postcard from the post war forties; boulangiers, pattissieres, salons.

The car came to a stop on a street that could have been in any number of cities on the continent, or for that matter, if the signs were in English, the twisty streets could have been the West Village in Manhattan. Robert jumped out without opening the door. It was harder for the Hanshi to get out than when he got in. They walked towards a non-descript building with green doors and heard American be-bop floating through the air. The entrance to the building looked ancient and opened up into a center court revealing six stairways leading up to what must have been hundreds of doors. The Hanshi smiled as the courtyard reminded him of an Escherian labyrinth.

Seeing his look of inquisitiveness, Robert mentioned that one got used to it after living in the area for about twelve years. The Hanshi’s antenna started to rise as they walked through one courtyard into another and finally into a third.

“Looks like a film noir setting,” said Robert with a smile.

The remark instantly put the Hanshi alert. The place seemed oddly still even though there were people seemingly going about their normal routines. Five men came walking towards him and the Hanshi instinctively knew they were going to attack.

A man with a club came right at him. Two others moved to his sides while another pair, one with nunchukus, tried to get behind him. They formed a circle and moved at him while demanding his money and watch. Robert began backing away. Don’t need him anyway thought the Hanshi as he moved a fake attack directly to the center of the man with the club. Noticing the obvious move the man stepped back avoiding the Hanshi’s attack as if he was trained to do so which was exactly the response the Hanshi wanted. Hearing a click from behind and knowing the sound was that of a butterfly knife, he feinted and drew the man with the club into him while beginning a fierce and prolonged shout. Instantly and with blinding speed he fired a straight punch and a fore knuckle strike into the man’s nose and throat totally cutting off his air supply as the club was raised to strike. Grabbing the club the Hanshi kept moving forward putting the other four to his rear. The man with the nunchukus came directly towards him and walked into a straight back kick under his chin forcing him into the knifer and forcing him to lose his balance. The Hanshi spun turning to face the remaining three as another charged in low and was easily thrown away with a one handed aikido move. The man fell flat on his back. Before he had completely landed, the Hanshi back stepped and blasted the man’s kneecap with a blow from the club, perfectly placed to the outside of the man’s leg turning it to gravel and jelly. The man screamed hysterically while a back fist smashed his temple. The fourth backed up and tried to draw a gun as the Hanshi rolled forward in a somersault and came up smashing the club against the man’s hand breaking the bones permanently causing the weapon to be dropped as the second part of the move jammed the end of the club into his face. The man began screaming as he went into instant shock. Without hesitation the Hanshi whipped the club into the knifer’s face and side stepping, drove his fingers into the man’s throat following with an elbow under the jaw snapping his neck. Backing away he smashed the club down on the man’s head then went back and finished the man with the broken knee splitting his head wide open with the club before finally whacking the one who had eaten his back kick across his face completely destroying the man’s nose and knocking out at least ten teeth. The whole thing had taken less than ten seconds.

The Hanshi crouched as he looked around and saw people who were watching and knew he had to get out of there fast. He took one last look around him and started to leave. Keeping the club because of his fingerprints he took two steps and turned around again. The attackers were writhing around on the ground moaning and crying. He picked up the fallen gun and continued in the original direction he and Robert had used.

For more info on the author and to order book, visit http://www.hanshi.com/books

Author of the best-selling interpretations of Musashi's "Book of Five Rings," Sun Tzu's "Art of War," along with Lao Tzu's "Living Tao," "The Shogun's Scroll," "The Way of the Modern Warrior," and "The Sword in the Boardroom," which focuses on business management based on honesty, integrity, and morality for contemporary negotiations. Rev. Stephen F. Kaufman is the founder of Self-Revealization Acceptance™, the first, foremost, and original reality facilitation concept ever presented to the modern world in 1993, guaranteed to bring immediate and permanent results. Acknowledged as a founding father of American Karate, he was elected to the title and rank of Hanshi, 10 Dan, the most prestigious accomplishment in the martial arts world in 1991 by international peer associations. His karate martial arts system is recognized by leading world martial arts master to be one of the most realistic warrior methods in the world. He has received countless awards and honors for his work. He has been awarded the Platinum Lifetime Achievement and Platinum Martial Arts Pioneer award denoting 50 years of service to the art.

This site uses Akismet to reduce spam. Learn how your comment data is processed.