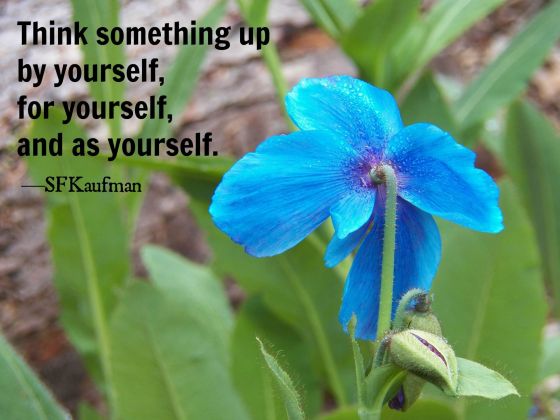 Combined imagery and quote is an ongoing, collaborative project between myself and Peggy A Thompson.

Author of the best-selling interpretations of Musashi's "Book of Five Rings," Sun Tzu's "Art of War," along with Lao Tzu's "Living Tao," "The Shogun's Scroll," "The Way of the Modern Warrior," and "The Sword in the Boardroom," which focuses on business management based on honesty, integrity, and morality for contemporary negotiations. Rev. Stephen F. Kaufman is the founder of Self-Revealization Acceptance™, the first, foremost, and original reality facilitation concept ever presented to the modern world in 1993, guaranteed to bring immediate and permanent results. Acknowledged as a founding father of American Karate, he was elected to the title and rank of Hanshi, 10 Dan, the most prestigious accomplishment in the martial arts world in 1991 by international peer associations. His karate martial arts system is recognized by leading world martial arts master to be one of the most realistic warrior methods in the world. He has received countless awards and honors for his work. He has been awarded the Platinum Lifetime Achievement and Platinum Martial Arts Pioneer award denoting 50 years of service to the art.

← The Nature of Weapons and the Main Objective in High Power Negotiations
You Are Already Perfect! →

This site uses Akismet to reduce spam. Learn how your comment data is processed.